The Academy Recommends “Garden Party” as A Must-Watch Short Film 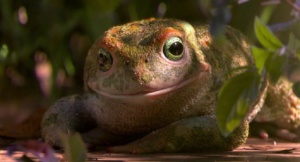 The Academy of Motion Picture Arts and Sciences recommends Garden Party as the short film that should be seen this weekend.

The animated short film, Garden Party, a group of frogs and toads make themselves comfortable in an abandoned villa. Slowly, the mystery of the owner’s whereabouts unfolds.

Made as a graduation film by Illogic Collective (a group of six French 3D artists), Garden Party was nominated for Best Animated Short at the 90th Academy Awards.

The movie takes place in a deserted rich house, a couple of amphibians explore their surroundings. An emerald green frog swims through a murky swimming pool while being followed by a bigger toad. They eventually end up in a bedroom that has all its sheets scattered about.

A small yellow frog tries and fails to catch a butterfly to eat and a larger fatter toad awakens in a kitchen full of rancid food. This does not stop it from dining on caviar and macaroons. The yellow frog makes its way into the house through one of the numerous bullet holes in the glass windows. An open safe and a gun can be seen, implying that a violent gunfight occurred there. As the night falls, the yellow frog finds the house’s security room and begins accidentally turning on numerous switches; lighting up a painting that reveals the house’s owner (who bears a strong resemblance to Donald Trump).

Lights, music, and water effects turn on outside as more amphibians show up to enjoy their new paradise. As they do so, the body of the house’s owner, clad solely in a bathrobe, floats to the top of the pool; having been pickled and swollen from resting at the bottom for so long. The amphibians pay no mind to him.