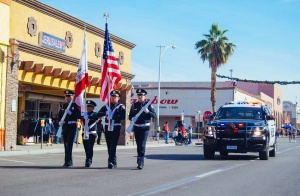 It was a “Rockin’ Christmas on the Border” parade in Calexico as the annual event was enjoyed by families and children.

Seventy organizations participated at this year’s parade which was organized by the Calexico Desert Valley Bandits, City of Calexico, Heffernan Memorial District, and the Calexico Chamber of Commerce.

This was the 54th annual parade Calexico has organized and every year it takes place on the second Saturday in December. Each year there is a different theme for the parade and the participants dress their floats according to the theme. The Calexico parade traditionally has participants from Mexicali. Like every year, Instituto Salvatierra arrived with their Banda de Guerra and cheer leaders.