Mariachi Music has been the traditional music of Mexico for decades and its sound has worldwide recognition.

So it’s no surprise that Calexico being a border city decided to capitalize on that tradition and have an annual event that brings the best mariachi bands around. Through its years the festival has grown and has welcomed renowned groups like Mariachi Vargas de Tecalitlan, Mariachi Divas and the winner of La Voz Mexico, Oscar Cruz.

The mariachi festival was first organized by Valley resident Helen Lopez and was initially held at the fairgrounds. Once the Imperial Valley Arts Council disbanded, the festival was going to be discontinued. The Calexico Chamber of Commerce and its executive director Hildy Carrillo decided to step in and took over the event in 2001.

The 27th Annual Mariachi Festival took place from May 16-19 in Calexico were a week-long celebration was enjoyed by the community. 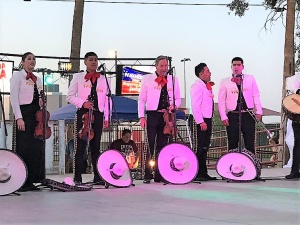 The first day of the Mariachi Festival saw the crowning of Estefania Velasquez, 21, an Imperial Valley College student, as the 2018 Senorita Mariachi. There was also the Mariachi Idol Competition were three participants competed to win the opportunity to sing at the concert. The winner of Mariachi Idol this year was Antonio Morales.

The night before the event the Tequila Tasting was celebrated as people had the opportunity to taste different types of tequila like Jose Cuervo, Jimador, among others.

The concert returned to Crummett Park after a couple of years and the city had a nice cool weather for people to enjoy the music of Mariachi Estrellas de Chula Vista, recording artist Leslie Lugo, and Mariachi Garibaldi de Jaime Cuellar.