The 2020 Olympic Games (that did not happen)

In the book “21 Lessons for the 21st Century,” Yuval Noah Harari, today’s most famous historian-philosopher, highlights the monumental civilizational achievement that is the Olympic Games. He is right on point.

Although the Olympic Games are inspired by the Olympics of Antiquity –athletic competitions held by various Greek city-states between the 8th century BC and the 4th century AD– the first modern edition of the Games took place in Athens until 1896. Since then, the Olympics have been held every four years in different cities of the world, with the exception of the editions of 1916 –as a consequence of the First World War– and 1940 and 1944 –during the Second World War.

We can identify in Harari’s account two distinct elements necessary for the organization of the Olympic Games as we know them today. The first is the existence of the National State as the global political unit. In the not-so-distant past, the world was divided into kingdoms, empires, tribal confederations, and isolated hunter-gatherer groups, all quite different from each other. It would have been impossible to carry out an Olympics that included the entire terrestrial geography, since probably the Chinese empire, created under “divine mandate”, would not have accepted to lower itself to the level of the Greek mortals, with its “mediocre” democracies.

The primacy of the State –consolidated in Europe after the Peace of Westphalia in 1648 and in the rest of the world during the next two centuries– implies that today, well-defined political units dominate and, according to the Charter of the United Nations, they are all equally sovereign. Three-minute hymns and rectangular flags for everyone –with the very dignified uniqueness of Nepal, whose banner breaks the mold.

Second, and as evidenced by the world wars exceptions, the Olympics require a prevailing peace in the global arena. It would have been unthinkable for the Mongols to participate in friendly competitions with the Europeans in the 13th century. Or for Muslims to have accepted an invitation to practice fencing with the Christians during the Crusades. In the last seventy years, there have been boycotts between rival nations (the United States didn’t go to Moscow in 1980, and the Soviet Union didn’t participate in Los Angeles 1984) but the Olympic Games have been held, uninterruptedly, every four summers. 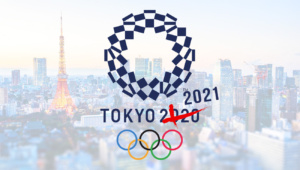 In addition to these two essential elements –the National State and world peace– the complexities derived from transporting Aztec ballplayers to the tournament organized by the Māori (first inhabitants of New Zealand) would have been insurmountable. In any case, the invitation would never have reached Tenochtitlán because these civilizations did not know about each other. Technology and globalization would be the third and fourth necessary components for fully inclusive Olympic Games.

Harari, at the end of his story about the Olympics, tells us: “So when you watch the Tokyo Games in 2020, remember that this sporting competition between nations actually represents an astonishing global agreement”. Well, guess what, Harari? We didn’t have Tokyo 2020.

A microorganism turned the world upside down. Some health systems have reached the brink of collapse and the world economy is in complete crisis. Hundreds of millions of people have lost their jobs and poverty will increase in the near future. Massive concerts are canceled, and sports are being played in stadiums without an audience.

The Tokyo 2020 Olympics were yet another victim of Covid-19. It would have been irresponsible to force athletes to travel by plane and to be locked up in crowded facilities (Olympic villas) for a month. Furthermore, empty stands would have made the event a bit soulless.

It turns out that, in addition to political uniformity, peace, means of transportation, and mutual recognition, the Olympics –increasingly complex and spectacular in the organization– require a world without a pandemic. Tokyo 2020 (whose logo was a work of art) will take place, hopefully, in 2021.

The Olympic Games are a wonderful staging of not only athletic ability, bravery, technique, and effort. They are also a sample of how far human fraternity can go since they require people from different cultures, religions, and political systems to unite –under the flag of their different countries– in a month of healthy and fun competition.