The 2017 Business Showcase at Imperial Palms Resort Was a Success 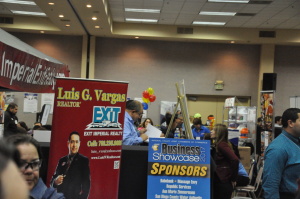 The Joint Chambers of Commerce is a non-profit organization comprised of members from the Brawley, Calexico, Calipatria, El Centro, Holtville, Imperial and Westmorland Chambers of Commerce whose focus is business development, the promotion of tourism, and legislative advocacy.

After over a decade and a half at the Imperial Valley Expo’s Preble Building, this year, the Imperial Valley Joint Chambers of Commerce elected to move the 2017 Business Showcase to the Imperial Palms Resort at Barbara Worth near the city of Holtville for the event that took place on January 12, 2017.

This year’s entry price per person was $6 for the entire three-hour event with a $1 discount if you had one of the printed postcards from one of the local Chamber of commerce. Children ages 2 and under entered for free.

Additionally, the annual raffle took place on every hour of the show, and gave away a total of $1,750 in official prizes along with similar giveaways from individual booths.

This year, more than 80 businesses and advocacy groups joint in attendance, along with nearly a dozen restaurants and several other service providers, handing out information about their services as well as freebies.

The move to the Imperial Palms Resort was made due to space constraints. While the Preble Building may be the largest at the Imperial Valley Expo, it wasn’t large enough to keep the Showcase for this year, so the move was necessary and it was a success. There was a larger than ever crowd at the Resort this year and officials plan on keeping the event here every year.

The Business Showcase, is an annual affair that brings some of the Imperial Valley’s businesses and advocacy groups together for one large event rather than have individual businesses focused during the more common monthly individual chamber “mixer” environment.