Testing starts for 1st Possible Coronavirus Vaccine in the US 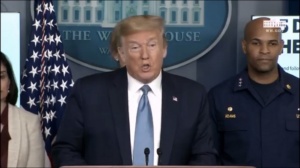 Scientists gave the first shots in the first test of an experimental Coronavirus vaccine leading off a worldwide search for protection even as the pandemic surges.

Amid the fears and actions taken by local and state governments to prevent the spread of this virus, a vaccine might be closer than people think.

According to the Associated Press, four healthy volunteers, scientists at the Kaiser Permanente Washington Research Institute in Seattle began a first-stage study of a potential COVID-19 vaccine developed in record time after the new virus exploded out of China and fanned out across the globe.

Vice-President Mike Pence said they have more than 2,000 labs coming online with the high-speed testing and are connecting states to those testing methods.

“In terms of delivering those services, more than 10 states — in addition to CDC labs, public health labs, and labs that states can now authorize in their states — more than 10 states have implemented their own drive-through testing sites.  And we want to commend New York, Colorado, Delaware, Washington State, Texas, and others that have implemented these on-site places where people can obtain tests,” Pence said.

Pence added that they are also working with a number of retail partners to add to the work that states are doing around the country, working to set up parking lot testing centers outside of stores.