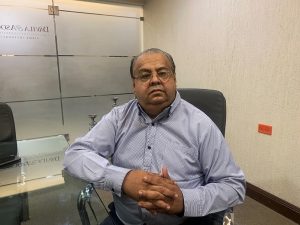 MEXICALI, B.C.- An interview was conducted with the former mayoral candidate for the state capital, Jaime Dávila. After the process of the so-called largest elections in Mexico, the lawyer and environmentalist made some statements about the post-electoral environment.

Regarding the election process that recently ended, the accountant expressed that the political parties had the challenge of overcoming abstentionism, however, it was not reached, he said, also emphasizing that regardless of the party in question: “The citizens must understand they must exercise their right to vote freely because if we do not participate in politics, in democracy, the great changes that we need as a society will never really take place”.

In addition, he expressed, the acts of violence that took place during the day of the elections are regrettable, regarding the lack of voter participation, he said, during his campaign people commented they would go to the polls, however, the results they were not as expected and, on the contrary, they were found with excuses such as the weather or lack of time.

On community and collective work

Of how society can demand those who elect as rulers, Dávila commented that it is not enough to go to vote, but that it is important to form a participatory democracy in which those who hold public office are held accountable,

Thus, the lawyer clarified, in Mexicali, there are various groups around violence against women, environmental, animal rights, and other problems, which arose precisely as a form of demand and protest against the neglect of the government. The lawyer and environmentalist emphasized: “You have to be an agent of change participating not only with criticism, not only by complaining.  Participation can transform the city”.

Finally, Dávila said he doesn’t have a political project right now, however, he has received some proposals. He assured that regarding the project to deliver trees and compost for reforestation in the city: “We are working partially on the ecological issue (due to the pandemic) but we will set new goals and do a little more than the previous year”.