Breaking News
Home / POLITICS / Tariffs Threat Puts in Doubt the Future of the Treaty between Mexico, the United States and Canada

Tariffs Threat Puts in Doubt the Future of the Treaty between Mexico, the United States and Canada 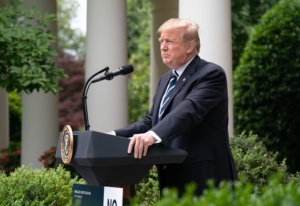 Mexico would enter an economic recession if Trump tariffs are implemented.

There will be serious economic impacts on exports if tariffs are implemented. It is important that the congresses of the 3 countries approve the USMCA in 2019.

One of the biggest economic risks would be the collapse in investment and manufacturing production that would leave the country in an economic recession.

“There is a great economic uncertainty generated by the tariffs that the president of the United States, Donald Trump, seeks to impose on Mexico. The economic analysis tells us that Mexico would enter an economic recession in the second half of 2019 if the Trump tariffs are implemented due to the great commercial integration of the two countries, “said Dr. Alejandro Díaz-Bautista, an economist and national researcher of the Conacyt as well as research professor at The Northern Borders College (El Colef).

It is important to mention that the objective of free trade agreements is to free countries from tariffs and other protectionist policies that harm their exporters. However, the commercial and economic issue is being mixed with the political migration issue. Recall that the United States represents about 80 percent of Mexico’s exports, which makes it the country’s largest trading partner.

The possible introduction of tariffs in Mexico by the United States would have a negative effect on the economy of Mexico and the United States, due to the linkages in the secondary sector and companies with value chains with Mexico, which will affect Consumers on both sides of the border with price increases.

The commercial tensions of Mexico with the United States will damage the Mexican economy, since it is already in a moment of great weakness, in addition to putting at risk the USMCA ratification by the congresses of the three countries.

President Trump announced a 5 percent tariff for all goods imported from Mexico as of June 10 in retaliation for recent migratory flows and caravans. Tariffs will continue to rise until reaching 25 percent in October if Mexico does not reduce the number of migrants arriving in the United States.

Other economic impacts, including the increase in the volatility of the exchange rate and the possible effects on inflation as a result of the commercial uncertainty, decrease the possibility of a reduction in the reference rate of the Bank of Mexico.

The Mexican peso remains pressured by the tariff threats made by US President Donald Trump against Mexico, while a delegation led by Foreign Minister Marcelo Ebrard is preparing to negotiate.

The dollar-peso exchange rate registered its highest closing in 2019, with the exchange rate at 19.82 per dollar, with data from the Bank of Mexico (Banxico). After the second quarter of 2019, the Mexican economy could move from the economic slowdown to economic stagnation, placing it at the forefront of a possible economic recession in the second half of 2019.

The foregoing as part of Trump’s speech for Mexico to resolve the migratory flow from Central America. As of June 2019, the economic pressures caused by tariffs can be triggered. The economic impact would eventually reach the pocket of Mexicans in the form of inflation. The fall in the peso would also have a second-round effect on inflation. Since it would raise the value of many basic products of the Mexican basket that are imported from the United States.

President López Obrador has sent a letter to his US counterpart to ask for dialogue and his foreign minister, Marcelo Ebrard, has flown to Washington to negotiate a way out of the deep crisis in the bilateral relationship.

The negotiation must be done before June 10, the date of the beginning of the tariffs imposed on Mexico.

US manufacturers fear that the tariffs would have devastating economic consequences, both for them and for consumers in the United States, because it will raise the prices of innumerable items, such as avocados, clothing and even medical devices.

The threat of tariffs also calls into question the future of the Treaty between Mexico, the United States and Canada (USMCA), which concluded after months of difficult negotiations to replace NAFTA, one of the most trumpeted achievements of President Trump’s government.

The threat of tariffs came on the same day that Mexico announced it would begin the process of ratification of the USMCA and less than two weeks after the country effectively negotiated the lifting of US tariffs on steel and aluminum that constituted to be an obstacle to the final approval of the commercial agreement.

The USMCA must be approved by the legislators of the three countries, but it is unlikely that Mexico will ratify the pact if it has to face new tariffs imposed by President Trump just a few months after the new agreement is signed which will replace the North American Free Trade Agreement, NAFTA.