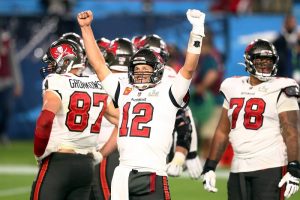 For anyone that doubted Tom Brady as the greatest NFL player of all time, Sunday’s victory against the Kansas City Chiefs proved that he is the best with seven championships in his resume.

Brady and the Tampa Bay Buccaneers won Superbowl LV in a dominant fashion with a score of 31-9. This was also the first time a home team wins the Superbowl at their home stadium.

Brady spent the first 20 seasons of his career with the New England Patriots, where he was a central contributor of the franchise’s dynasty from 2001 to 2019. Brady is considered by many sports writers, commentators, and players to be the greatest NFL player of all time.

As the team’s primary starter for 18 seasons, Brady led the Patriots to a total of 17 division titles (including 11 consecutive from 2009 to 2019), 13 AFC Championship Games (including eight consecutive from 2011 to 2018), nine Super Bowl appearances, and six Super Bowl titles, all NFL records for a player and franchise. He joined the Buccaneers in 2020, where he led them to Super Bowl LV in his first season. His Super Bowl appearance with Tampa Bay will be his record 10th individually.

In his first season as a player for the Buccaneers, quarterback Tom Brady will appear in his record 10th Super Bowl. The Chiefs will seek to become the first team to repeat as Super Bowl champions since Brady’s former team the New England Patriots (XXXVIII and XXXIX). Due to COVID-19 protocols limiting stadium capacity to 25,000 fans, this will be the lowest attended Super Bowl.

Country music singer Eric Church and R&B singer Jazmine Sullivan will perform the national anthem, while the halftime show will be headlined by Canadian singer The Weeknd.

As of the start of the 2020 NFL season, the league had forbidden on-field entertainment, such as halftime shows and national anthem performances at games with spectators.

The state of Florida removed capacity restrictions for sporting events in October, although the three Florida-based teams have voluntarily maintained 20-25% capacity limits. As of late October 2020, the NFL was planning a minimum attendance of 20% of capacity, in hopes that a larger capacity would be possible by game day.

On January 22, 2021, the NFL had originally announced that the game would have 22,000 fans in attendance, 7,500 of whom would be health care workers who had received a COVID-19 vaccine, primarily from the Tampa and central Florida region. The NFL was also planning on helping fill in the empty seats by selling 30,000 cardboard cutouts to fans. On February 2, the league increased the expected attendance to 25,000. Super Bowl LV is set to be the least-attended Super Bowl in the game’s history; the next-lowest attendance was the 61,946 who attended the inaugural game in 1967.