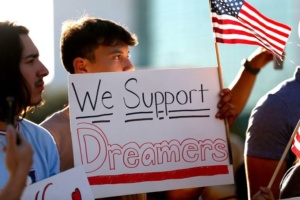 The Supreme Court rejected the Trump administration’s attempt to dismantle the program protecting undocumented immigrants brought to the country as children, a reprieve for nearly 650,000 recipients known as “dreamers.”

Trump reacted to the news:

“As President of the United States, I am asking for a legal solution on DACA, not a political one, consistent with the rule of law. The Supreme Court is not willing to give us one, so now we have to start this process all over again,” Trump tweeted.

The Deferred Action for Childhood Arrivals (DACA) was an American immigration policy that allowed some individuals who entered the country as minors and had either entered or remained in the country illegally, to receive a renewable two-year period of deferred action from deportation and to be eligible for a work permit.

As of 2017, about 800,000 individuals—referred to as Dreamers after the DREAM Act bill—were enrolled in the program created by DACA. The policy was established by the Obama Administration in June 2012 and rescinded by the Trump Administration in September 2017. In November 2014 President Barack Obama announced his intention to expand DACA to cover additional illegal immigrants. But multiple states immediately sued to prevent the expansion, which was ultimately blocked by the courts.

President Trump announced in September 2017 that he was cancelling this Executive Order with effect from six months and he called for legislation to be enacted before the protection phased out in March 2018, stating “I have a love for these people, and hopefully now Congress will be able to help them and do it properly.” Trump’s action was widely protested across the country. Business leaders argued it was unfair and could harm the economy.