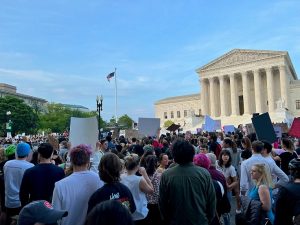 The Supreme Court has ended constitutional protections for abortion that had been in place for nearly 50 years. The decision by its conservative majority to overturn Roe v. Wade on Friday is expected to lead to abortion bans in roughly half the states. According to Associated Press, the ruling came more than a month after the stunning leak of a draft opinion by Justice Samuel Alito indicating the court was prepared to take this action.

“Today, Life Won. By overturning Roe v. Wade, the Supreme Court of the United States has given the American people a new beginning for life and I commend the Justices in the majority for having the courage of their convictions,” former Vice President Mike Pence said.

“I am heartbroken for people around this country who just lost the fundamental right to make informed decisions about their own bodies,” Former First Lady Michelle Obama said in a statement reacting to the news.

Roe v. Wade, was a landmark decision of the U.S. Supreme Court in which the Court ruled that the Constitution of the United States generally protects a pregnant woman’s liberty to choose to have an abortion. The decision, which struck down many U.S. federal and states abortion laws, has fueled an ongoing debate in the United States about whether, or to what extent, abortion should be legal, who should decide the legality of abortion, and what the role of moral and religious views in the political sphere should be. It also shaped debate concerning which methods the Supreme Court should use in constitutional adjudication.

On May 2, 2022, Politico released a first draft of a majority opinion written by Justice Samuel Alito, the authenticity of which Politico said it had verified. The draft opinion would overturn Roe v. Wade and Planned Parenthood v. Casey if held by the majority and thereby finalized in its present form. Alito’s draft decision called the Roe decision “egregiously wrong from the start”, as abortion is not listed in the Constitution as a protected right and instead would allow states to decide on abortion restrictions or guarantees under the Tenth Amendment to the United States Constitution.

Shortly after the release of the document, multiple protests occurred in cities throughout the country and outside the Supreme Court Building in Washington D.C., along with multiple individuals such as lawyers, politicians, and activist groups speaking out about the leaked draft.

From 1973 to 2022, abortion was fully legal throughout the United States and its territories, but many states instituted strict abortion limits that make accessing the procedure next to impossible or almost completely impossible, as in Oklahoma. Abortion is a highly controversial and divisive issue in the society, culture, and politics of the U.S., and anti-abortion laws have been in force in each state since at least 1900.

In 2021, the state of Texas devised a legal workaround to Roe that allowed it to outlaw abortion at six weeks of pregnancy despite the continued existence of Roe and Casey. Other states have copied this tactic to sidestep Roe and immunize their anti-abortion statutes from judicial review, including Oklahoma, which used this maneuver to outlaw and eliminate access to abortion within the state.

The shift of the ideology of the Supreme Court, through the 2020 appointment of Justice Amy Coney Barrett, who was outspoken against abortion before her appointment, made Dobbs a potential vehicle to challenge both Roe v. Wade and Casey. More than 20 states prepared legislation, including 13 with trigger laws, to strictly regulate abortion should Dobbs overturn Roe and Casey. Dobbs case gained more attention in the wake of legal battles over the Texas Heartbeat Act, enacted in May 2021, leading to near record-setting amicus curiae submissions in Dobbs.

Oral arguments before the Supreme Court were held in December 2021. On May 2, 2022, Politico published a leaked draft majority opinion by Justice Samuel Alito. It would overturn Roe and Casey by nullifying the specific privacy rights in question, eliminating federal involvement, and leaving the issue to be determined by the states. Through a statement made by the Chief Justice of the United States, John Roberts, the Court confirmed the document’s authenticity, but said that it “does not represent a decision by the Court or the final position of any member on the issues in the case”. The decision was issued on June 24, 2022, ruling 6–3 that the right to an abortion was not a constitutional right, overturning both Roe and Casey and that states should have discretion in regulating abortion.