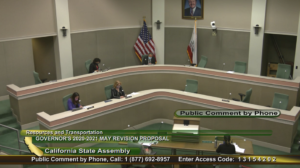 Imperial Valley residents in support of the proposed funding for the New River made their voices heard to a budget assembly committee to make sure the funding stays there.

The Governor’s revised proposal includes a $28 million capital investment for the New River Improvement Project.  The New River Improvement Project features a pipe that encases the contaminated water entering at the International Boundary bypassing Calexico, reroutes the wastewater discharged from the City of Calexico’s treatment facility to restore some flow in the original river channel through the city, and installs a trash screen just north of the border.  The estimated cost of the project is $28 million.

They May revision the last step before the final proposed budget is presented before final adoption on June 30. The Assembly Sub-Committee on Resources and Transportation heard the public comments from residents of the Imperial Valley supporting the New River funding as well as the Salton Sea.

Assemblyman Eduardo Garcia convened an Imperial Valley stakeholder group to coordinate New River advocacy in preparation of the Thursday, May 21, Assembly Budget hearing where the $28 million funding proposal for the New River Improvement Project will be reviewed. The strategy session was conducted via ZOOM and included local government officials as well as community organizers.

“While we successfully ensured that the proposed $28 million for the New River Improvement Project remained in the Governor’s Budget May Revision, we must continue to present a strong, unified front to protect and secure these funds. COVID-19 has left our budget in a precarious situation. California is facing significant cuts across the board. The public health, environmental, and economic stakes are higher than ever, and we cannot let this opportunity slip through our fingers without a fight,” said Assemblymember Garcia.

“The Calexico City Council approved a letter in support of this funding that will address a health problem that has affected our city for many years,” Figueroa said.

Imperial Valley Activist Erik Reyes also spoke in support of the New River project saying that is an important step for the residents that live near the river.

“Having this funding will help us address a public health issue that has been here for decades and I am in support of this bill,” Oliva said.