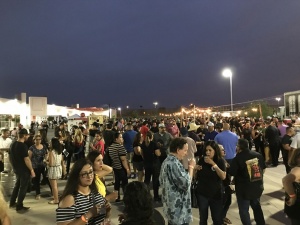 Thousands of Imperial Valley residents enjoyed a night of beer selections and music by La Cachimba and the tribute band Red Hot Chili Peppers at Gran Plaza Outlets. The hot temperatures of the previous days went down so people could enjoy a great evening with family and friends.

Gran Plaza Outlets hosted the annual Beer Fest where the attendees enjoyed a variety of beer selection from local craft companies and a variety of unique beers to try while enjoying a great evening with family and friends.

Residents from El Centro, Brawley, Heber, Calexico, and Mexicali attended the event to also enjoy the music. Companies like Calexico Brewing Co. were able to exhibit their locally made craft beer as well as other beer companies like Coors, Heineken, and others.

Local band La Cachimba began the night by playing their hit songs popular cumbia songs so that people could dance. La Cachimba is composed of Calexico artists that have created a musical band that has become a favorite of Imperial Valley residents.

The brand was followed by a Red Hot Chilli Peppers tribute band.

Formed in 2009, the Red Hot Chili Peppers have quickly risen to be the most active Chili Pepper tribute while also reaching international markets in Brazil, Mexico, and Japan.  With top musicians hailing from as far as Italy and Argentina, the Red Not’s have stopped at nothing to develop the most accurate re-creation of that distinctive alternative funk rock sound everyone knows to be Red Hot Chili Peppers.