Between tears, uncertainty and pain, a human rights tragedy is being experienced, with unfounded justifications, lack of evidence and with the international community against them, the Russian Federation continues to attack the rule of law of the Ukrainian people, and worse they continue ending the lives of civilians on Ukrainian soil. The Ukrainian people throughout its history have suffered various attacks on its sovereignty and independence, from the invasions of the Russian Empire and Austria-Hungarian, as today they continue to suffer the Russian Federation’s attacks on their freedom and recognition as a nation.

The first recognition in the international community of Ukraine occurred after being part of a founding member of the United Nations, later its independence is recognized again in 1991 when the Soviet Union is dissolved.

However, the Ukrainian people continue to defend their sovereignty and independence before the Russian Federation, last February 24, 2022, was a dark day for the world, after hearing the news that Russia had attacked the Ukrainian territory, the fear of a possible Third World War emerged. As an international lawyer, I did not think that I would have to see a possible world war, it is something that I see as part of history, of the past, by dedicating myself to teaching international law I constantly highlight the consolidation of the international community, with a universal body that promotes peace, being the justification for its creation to avoid future invasions and territorial expansion, however, this news not only generates mixed feelings but also uncertainty before the international norms that have consolidated the nations. It is true that there are still armed conflicts in the world, however, the actions of Russia, as a nation with an authoritarian and blunt position of invading another territory without considering a peaceful settlement as provided by the Charter of the United Nations is unheard of.

On February 27, 2022, based on articles 36(1) and 40 of the Statutes of the International Court of Justice (ICJ), Ukraine requested the ICJ to institute proceedings against the Russian Federation in relation to the interpretation, application and compliance with the Convention for the Prevention and Punishment of the Crime of Genocide, after the events of February 24 and subsequent events that have continued to occur. 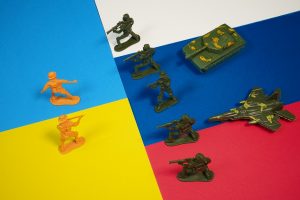 The Russian Federation justifies its actions of implementing a special military operation against Ukraine, on the grounds that it argues that Ukraine has violated the 1948 Convention on the Prevention and Punishment of the Crime of Genocide (the Convention) by committing acts of genocide in the Luhansk and Donetsk provinces, based on this Russia recognized the so-called “Donetsk People’s Republic” and “Luhansk People’s Republic”. Likewise, it justifies the armed invasion with the express purpose of preventing and punishing alleged acts of genocide. For its part, Ukraine argues that these facts are false and that Russia’s invasion of Ukraine’s territory implies serious and widespread violations of the human rights of the Ukrainian people.

The ICJ set March 7, 2022, as the date for the hearings to establish the provisional measures of the request filed by Ukraine against Russia for its unjustified military invasion. The aforementioned hearings took place without the presence of the Russian Federation and, despite being warned of the procedure and having been duly notified of the hearings, they decided not to appear. It is evident that Russia does not want to settle the conflict peacefully, it has had opportunities to harmoniously reach an agreement, however, it has decided not to cooperate.

On March 16, 2022, the ICJ established provisional measures which were:

To this day, Russia continues to abuse its right under the Convention, ignoring what was ordered by the ICJ. Russia’s actions are contrary to international law, they go against the very reason why an international community exists, and given its refusal to cooperate, it not only continues to violate the rules but also violates the rule of law as we know it and the lives of thousands of people who do not want an armed conflict.

“Madame President, Members of the Court: in less than two weeks, this case has become much bigger than just Ukraine versus Russia. It has become a test of who will prevail: Russia or the post-war international legal order. The tragedy we are all witnessing in the streets of Kyiv, Kharkiv, Mariupol, Kherson, Volnovakha and so many other Ukrainian cities is precisely what our modern international legal system was designed to prevent.” Professor Harold Hongju Koh on the public hearing before the ICJ on March 07, 2022.