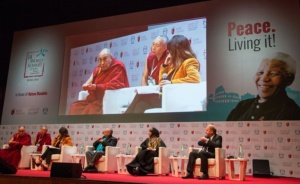 Over 12,500 attendees participated in the 4-day event attended by 30 recipients of the awards

Mérida, Yucatán.- The State of Yucatan, Mexico completed its duties as host of the 17th edition of the World Summit of Nobel Peace Prize, which took place from September 19 to 22 with a closing that highlighted the state’s leadership and goals of peace and equality. During the closing ceremony, the 30 Nobel Peace Prize winners presented the distinction to the state’s Governor Mauricio Vila Dosal.

This is the first time that this recognition is given to a state, placing the destination’s environment of respect for indigenous cultures and people on the word’s stage.

“This speaks very well of all of us who live in this state, having understood the importance of this great event. We put our state in the eyes of the world and giving the best impression and we will continue with the work of continuing to grow in tourism and creating jobs throughout the state to provide a better quality of life for Yucatecan families, ”said the Governor.

The State of Yucatan was the first Mexican state to host this international event that celebrates peace. More than 12,500 attendees participated in 4 days of activities at the International Congress Center (ICC), with more than 300 national and international media broadcasts to 17 countries via streaming, reaching more than 40 million viewers.

Similarly, representatives of organizations awarded the Nobel Peace Prize such as the United Nations Children’s Fund, Amnesty International, the Nelson Mandela Foundation, the International Office for Peace; the Martin Luther King Center, represented by Berenice A. King, daughter of the American social activist, and the International Labor Organization, among others.

Ekaterina Zagladina, the Summit’s president, highlighted the host Governor Mauricio Vila Dosal, as well as the hospitality and warmth with which the Yucatecans and the organizing team, consisting mainly of officials of the Secretary of Tourism Development of Yucatan, led by Ms. Michelle Fridman Hirsch, who welcomed the president, Laureates, panelists and Summit attendees.

The conference began last Wednesday with the Youth Program “Leading by example”, in which more than 1,000 students and 180 teachers from different parts of the world participated. All these students joined the more than 12,500 people who attended the activities of the Summit, in which 44 workshops were held and a journalism program was developed with the aim of adding everyone’s voice.

Priority issues such as economic and social development, the responsibility of global media in peacebuilding, nuclear disarmament, the rule of law, international cooperation and education were addressed at the plenary tables and forums of the Summit.

“Today I can say that I feel the greatest satisfaction since for several days, Mexico has been in the eyes of the world for a different reason. In recent weeks, and since it was announced that the World Summit of Nobel Peace Prize would take place here in Yucatan, the name of Mexico has gone around the world using the noun of peace,” said Michelle Fridman, Minister of Tourism of the State of Yucatan. “These days there has been no talk of the bad men from Mexico, on the contrary, we have talked about those great men who have transformed the history of humanity and that today meet in our state to enlighten us with their presence.”

At a closing ceremony, the “Peace Summit Award” presented by Ms. Michelle Fridman was also presented to prominent figures in philanthropic work, such as Saskia Niño de Rivera, for her work for the rights of women in prison; Miguel Bosé, as a human rights activist; Mary Shuttleworth, a South African teacher focused on spreading human rights and Ricky Martín for his humanitarian actions carried out for several years.