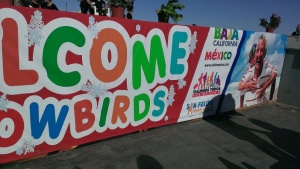 SAN FELIPE, BC- Wednesday, November 8, 2017.- In order to promote international visits to the seven destinations of the entity, the State Administration headed by President Francisco Vega de Lamadrid, through the State Tourism Secretary ( SECTURE), will hold the Snowbirds Fiesta 2017 event, next Friday, November 10, to welcome the more than 5,000 American and Canadian citizens who come to San Felipe to spend the winter period.

The sub-delegate of SECTURE in San Felipe, Herlinda García Pérez, reported that the festivity corresponds to the annual welcome given in the town to “snow birds”, which is carried out in November as a thank-you, since it’s on this date when most of them return to this sun and beach destination.

She indicated that the central theme for this year will be the ‘Day of the Dead’, as a cultural exchange between the customs that represent this month for Mexico, so that they can know a little about the history of the national tradition.

The state official indicated that for these purposes, the participation of the House of Culture of San Felipe, the agency in charge of the program that consists of folk dance performances and music characteristic of our country, will be counted on.

“For us it is very important to show our gratitude to those who visit us from November to January, to spend the winter season, since over the years they have created a very important social bond with the community, when doing work and altruistic campaigns. Their presence in San Felipe goes beyond being a visitor, and for that reason we reward them with this welcome committee every year,” she concluded.