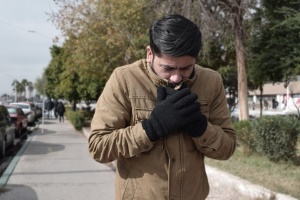 MEXICALI, BC- Given the low temperatures that are occurring in the region, the Government of the State headed by Francisco Vega de Lamadrid, through the Secretary of Health of Baja California, recommends that the public take extreme care for the cold season.

The head of the Unit, Guillermo Trejo Dozal, said that one of the priorities is to protect the extremes of life, which are children under five and adults over 60, since they are more vulnerable to being affected, however, all age groups should take into account the preventive measures that are issued by the health sector, to avoid negative effects on their health.

He noted that, in preliminary figures, in this 2019 there is a record of a total of 61 thousand 966 consultations for Acute Respiratory Infections (ARAS) in the general population, of which 12 thousand 626 have been in children under 5 years.

That is why, given the low temperatures of the season, it is important to take into account the following preventive measures:

In addition, citizens are asked to reinforce hygienic measures to prevent cases of diseases, frequent hand washing, ventilating homes, and cleaning surfaces of tables, desks, among others.

People who must go to Health Centers or Health Units are those who have the following symptoms: a cough, malaise, throat irritation, runny nose, ear or throat pain, headache and very important, don’t self-medicate since that could complicate the clinical picture.

The state official reminded the community that it is everyone’s responsibility to help prevent the spread of the disease, so it is necessary for everyone to take preventive measures, clean up and avoid contagion with sick people.