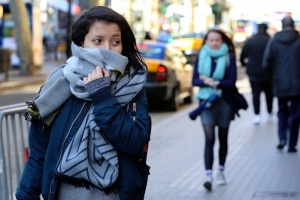 MEXICALI, BC- Due to the low temperatures that have registered in the region, the State Government headed by President Francisco Vega de Lamadrid, through the Department of Health of Baja California, recommends that the public take extreme care for the cold season.

The head of the unit, Guillermo Trejo Dozal, said that surveillance in conditions directly related to the cold begins in week 40 (as of September 30, 2018), which are hypothermia, poisoning by butane gas and burns. He explained that hypothermia is the loss of body heat at a temperature of 35 degrees Celsius or less, that is, during cold weather the blood is diverted from the skin and limbs to preserve, protect and maintain the temperature of the body, the middle part of the body, this makes distant parts of the body more exposed to environment temperatures.

He pointed out that special protection should be given to susceptible age groups such as children under 5 years of age and older adults; and it is important to take the following preventive measures into account: use thick wool clothes, scarves, gloves, and hats during the winter; ingest fluids and foods high in vitamin “C”, do not go immediately outdoors after bathing and do not take trips to places with extreme cold.

He mentioned that people suffering from hypothermia can show cold, pale and stiff skin, drowsiness, mental confusion, clumsiness, hallucinations, unconsciousness, shallow and slow breathing if they do not receive the medical attention they can reach coma or death.

The measures in case of presenting symptoms of this condition, are: shelter the person with dry clothes, cover them with a blanket, give them hot drinks, do not provide alcohol, drugs, coffee or food, the extremities must be warmed up, since not doing so could make the person suffer cardiac arrest, you should keep their nose and mouth free.

Trejo Dozal concluded by saying that, in case of presenting the aforementioned symptoms, they should go to their nearest health unit for medical attention.