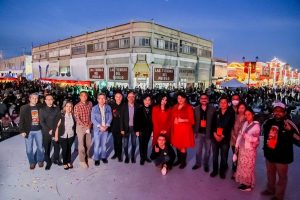 For the State Government, headed by Marina del Pilar Avila Olmeda, one of the main objectives is to make visible the historical heritage, the cultural richness, and the contribution of the Chinese community in Mexicali.

This was stated by the Secretary of Culture of Baja California, Alma Delia Abrego Ceballos, during the closing of the Chinese New Year celebrations that took place in the Historic Center of the state capital, with the participation of thousands of people from all municipalities of the State and even of California and Arizona.

The official stressed that thanks to the joint work between the organized society, the Government of Baja California, and the Mexicali City Council, it was possible to organize this great event that included exhibitions, gastronomy, and artistic presentations alluding to the Asian country.

For his part, Miguel Aguíñiga Rodríguez, Secretary of Tourism in the entity, highlighted that the behavior of Baja Californian society in the face of the pandemic managed to reach the green epidemiological traffic light, which made it possible to hold this event and in the future, it will promote an economic reactivation. in all municipalities.

The diversification of tourist offers, he said, will attract more visitors to the different points of interest in the state; visitors not only from other parts of the country but internationally.

The Mayor of Mexicali, Norma Alicia Bustamante, and Yu Yue, Consul General of the People’s Republic, also participated in the event. China in Tijuana, as well as Rubén Ernesto Hernández Chen, Minister of Culture and Tourism of the Chinese Association of Mexicali.

The celebrations alluding to the year of the “Water Tiger” concluded with video mapping presentations where the history of the Chinese community was represented.

Likewise, a commemorative parade and a cultural program were held that highlighted the best of Chinese culture in Mexicali, paying tribute to their contributions to the development of the city.