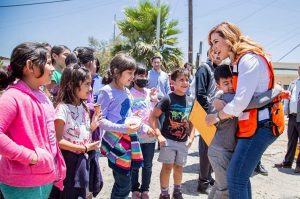 Following up on a comprehensive policy that guarantees the rights of all to identity and nationality, the Government of the State of Baja California, through the State Civil Registry Office, launched the campaign “I am Mexico 2022 “, which promotes and facilitates the registration of children and adolescents born in the United States but of a mother or father of Mexican origin, announced the Governor of Baja California,

The Governor reported that so far this year there have been 646 beneficiaries of this campaign, which saves a significant number of resources for mothers, fathers, or guardians.

The Head of the Executive Power of the State stressed that it is a priority for her administration that all Baja Californian children and adolescents have the documentation they need to have an identity and guarantee basic services such as Education and Health for them.

The benefit of the program, in agreement with the Government of Mexico, consists of exempting the apostille, the translation, and the certificate of the non-existence of birth, achieving savings for the beneficiaries of between 2,600 and 5,600 pesos.

It should be noted that, although it is the same savings for all the municipalities of Baja California, in the case of Mexicali there is an additional cost of 990 pesos contemplated in the Revenue Law 2022 of the XXIV City Council.

Finally, the general director of the Civil Registry of Baja California, Elizabeth Márquez, reported that of the total 223 correspond to Tijuana, 154 to Mexicali, 143 to Playas de Rosarito, 80 to Ensenada, 31 to San Quintín and 15 to the port of San Felipe.