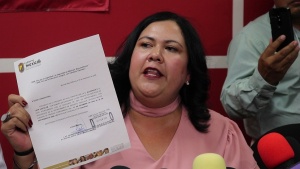 MEXICALI, BC- The Government of the State, through the Legal Undersecretary in charge of Víctor Lujano Sarabia, clarifies and denies the statements made by Senator Alejandra León, regarding the entry into the First Chamber of the appeal of legal protection against the Governor of the State, Francisco Vega de Lamadrid.

Lujano Sarabia explained that the Senator does not even consult the concepts, and therefore confuses terms, instances, procedures and as a consequence wants to do the same to the population, adding that it is not true that the appeal of legal protection was filed before the Superior Court of Justice of the State, whether it be against the Governor of the State or because of the water issue.

Additionally, he stressed that “only the case file was requested from the Collegiate Court, which is part of the procedure and there is no agreement to attract the matter.”