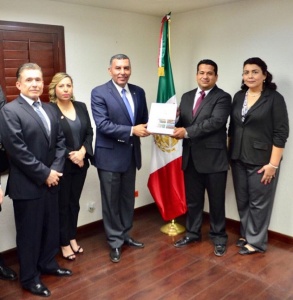 MEXICALI, B.C. – Sunday, October 1, 2017. On behalf of the State Governor, Francisco Vega de Lamadrid, the Secretary General of Government, Francisco Rueda Gómez, presented the Fourth State of the Territorry Address to members of the XXII Legislature of the State.

Rueda Gómez was received in Legislative Power by the President of the State Congress, Edgar Benjamín Gómez Macías, by the deputy Eva María Vásquez Hernández, Secretary of the Board of the State Congress. There, Rueda Gómez presented the Deputy President the document containing the results of the programs and lines of action carried out by the present State Administration for the period from October 1, 2016 to September 30, 2017.

The Genera Secretary of Government, in delivering the State of the Territory Address that holds the state public administration, expressed the willingness of the Secretaries and the head of the State Attorney General’s Office to respond to the call of the Legislators in a timely manner to release the gloss corresponding to the Fourth Report of Government.

Rueda Gómez emphasized that with full respect for the division of powers, and in accordance with the democratic vocation of the Executive, compliance with the provisions of Article 49 Fraction fifth established in the Political Constitution of the State of Baja California was fulfilled.

Edgar Benjamín Gómez Macías, President of the State Board of Directors, commented that they will continue to work with the dedication and responsibility conferred by the Constitution and the citizens of Baja California, the document will be presented to the Board of Political Coordination (Jucopo), where they will analyze the information for later review in the glosses.