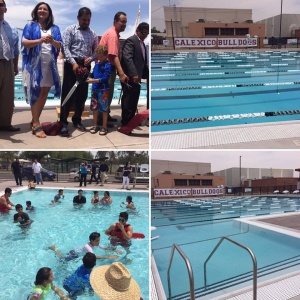 CALEXICO, CA.- A project which once seemed like an ever-threatened hope came to fruition Friday June 10th afternoon, during the ribbon cutting ceremony of the highly anticipated Margarita De Necochea Bulldog Aquatic Center held by the Calexico Unified School District and the City of Calexico.

The Margarita De Necochea Bulldog Aquatic Center replaces the pool damaged by the 7.2 earthquake that struck the region back in April of 2010. The state-of-the-art recreational facility includes a competition pool, recreational pool, a “kiddy” pool, locker and shower room, and shade structures.

The Margarita De Necochea Bulldog Aquatic Center name comes from the late Margarita De Necochea who worked over two decades at the Calexico High School library and last wish was to rebuild the community pool before her passing in 2011.  Bulldog Aquatic Center was chosen during a school wide contest won by Laura Sierra a Calexico High School freshman.

Assemblymember Garcia emphasized the successful efforts of Senator Hueso to allocate $2.7 million when the State was cautiously watching their monies in 2014. 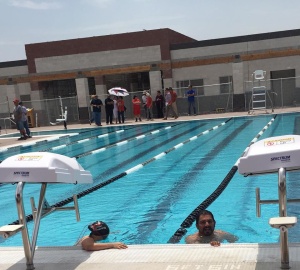 After the ceremony, Senator Ben Hueso challenged any one guest to a 100-yard swimming race resulting in a $2,500 donation to the swim team if defeated by that opponent. Calexico High School student Daniela Garcia accepted the challenge that ended up in a tie.