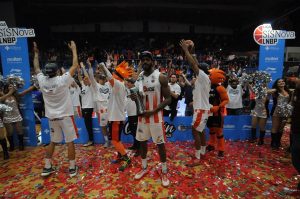 After two challenging seasons due to the pandemic, it was formally announced that Soles will be playing the entire season in Mexicali.

This is, of course, great news for the die-hard fans that haven’t been able to enjoy their team to the fullest due to the restrictions and mandates put in place. The 2020 season played behind closed doors and the following had to be played in Tijuana due to the high number of cases at the time. In addition, the league made a modified schedule of games due to the suspension of games during COVID. The regular season will start on July 21 and end on November 3rd.

But those challenging days are gone and the dawn of a new beginning is upon us, according to Soles President, Jose Carlos Cota Arce.

The President added that people can now buy their tickets for the upcoming season. For those interested, the phone is (686) 237-2035 or e-mail quimaro@solesmexicali.com

The Soles de Mexicali is a Mexican professional basketball team based in Mexicali, Baja California, Mexico, playing in the Northern Division of the Liga Nacional de Baloncesto Profesional (LNBP). The team was founded in 2005 and has been established as one of Mexico’s youngest and most successful basketball franchises.

After only 2 years of existence, the team won its first national championship against the Halcones UV Xalapa. As of 2020, the Soles are the current champions of the LNBP.