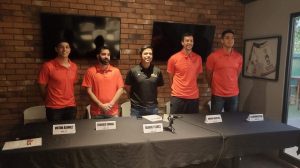 Soles de Mexicali presented to the local media and the fans through a broadcast on social networks what will be their participation in the 2022 season of the Sisnova LNBP League.

At a press conference led by its general manager, Mario Flores Montaño, the details of the calendar were given, which will consist of 20 games, half of them to be held at the PSF Auditorium in the capital of Baja California.

In addition, the assistant coach Federico Corbaz was present, as well as three of the players already signed for the season, Alejandro Reyna, Víctor Álvarez, and Román Martínez, who returns to the Cachanillas after almost 6 years of absence due to injury.

In what is his 18th year of existence, Soles shows a strong commitment to his fans, as Flores Montaño said.  “We are putting together a competitive team that is looking for the highest in the next tournament, the board is committed to the fans and the sponsors.”

Before the season starts, Mexicali will travel to Chihuahua on Wednesday, July 13 to play the Dorados Cup where they will compete before Dorados, Fuerza Regia, and Libertadores de Querétaro, after a few days they will go to León to play their first two games of the season.

The home debut will be on Thursday, August 4 when they host the Mineros de Zacatecas in a two-game series, Friday the 5th will be the second game.  All games in the Auditorium will be at 8 pm.

Regarding his return to Cachanilla lands, the man born in El Paso, Texas, Román Martínez said, “it is an honor to be here after almost six years, I thank the board that brought me back.”

Through a video, the head coach of Soles, Iván Déniz O’Donnell, expressed his pleasure at having Román back on the team, “I am happy, he is an important reference for the LNBP and of course for Soles, we know what professional that he is, for me, it is a joy, so let’s enjoy it again”.

At the same time, Federico Corbaz pointed out that they are happy with the players who have signed so far, “we connect experience with youth and energy, Román will bring us a lot of experience, in the coming days we will move other chips to round out the team”.

Víctor Álvarez, who is back in Soles after two seasons, promised to provide the same intensity of play that the fans already know. While Alex Reyna was happy to be in Mexicali and assured that he would do his best to help the team.