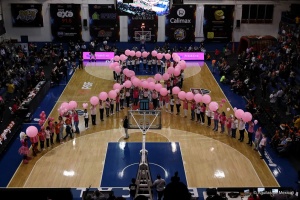 Mexicali, Baja California.- Club Soles de Mexicali celebrated a Pink Game for the fourth consecutive year in which part of its revenue went to the Mujeres Que Viven Foundation.

Within the framework of breast cancer awareness, a human bond was formed at halftime inside the auditorium, to generate awareness in the Soles de Mexicali audience, and in turn, a check was sent out alluding to the donation done by “Asadero Las Brasas”, representing the amount obtained by the sale of a “pink drink” that was implemented throughout the month of October.

The Mujeres Que Viven Foundation thanks all the support received by the Club Soles Mexicali, Asadero Las Brasas, and the businesses who were part of the bazaar where part of the profits was for the benefit of the foundation and all those involved in carrying it out.