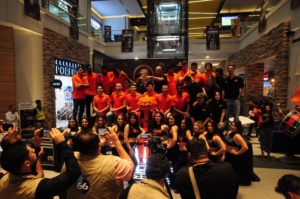 Mexicali, B.C. – Soles de Mexicali presented the players who will defend the Cachanilla jersey for the 2019 edition of the National Professional Basketball League, (LNBP).

Accompanied by the public of Mexicali, Iván Déniz and the general manager Mario Flores presented the members of Soles for the 2019-20 season.

The Cachanillas that celebrate their 15th anniversary, presented a squad with a lot of youth and speed, in addition to the integration of young Mexicans who have stood out so far, as is the case of Austreberto Tona and Juan Pablo Baldenebro.

Soles starts the league in Puebla on September 19, stays on tour to visit Hurricanes of Tampico and returns home to inaugurate the 2019 season at the PSF against Aguacateros de Michoacán on October 1.