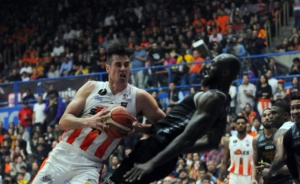 More than 5 thousand people filled the PSF Auditorium, expecting their team would be crowned as champion, but Mexicali Soles could not accomplish those expectations, with a difference of more than 20 points, Fuerza Regia de Monterrey won as a visitor, to take the sixth game of the series, and tie the finals 3-3, prolonging the series until the seventh final game, to Tuesday Night, February 18.

After a spectacular presentation of the Second Military Region Mexican Army War Band, a spectacular show of lights and gas effects followed, the referee took the kick-off. Throughout the first period, people kept cheering for the home team, despite the fact that the Monterrey team scored an advantage of up to nine points, which it maintained during the first and second periods.

For the second half, it seemed that Soles could catch up, when after a series of triples, it got six points away, however, several errors in the speed starts cost them the game, for that reason, at the end of the third period, Fuerza Regia went to time up with 14 points ahead. At the same time, the crowd’s enthusiasm declined, and many decided to leave the auditorium during the last quarter.

With a score of 53-76, Fuerza Regia achieved its goal and won the game to extend the series until the seventh and final game, where the winning team will raise the National League of Professional Basketball champion trophy for the 2019-2020 Season.

It is important to note that, if Soles Mexicali achieves victory, it will become the most winning team of the Mexican league’s history, winning their fourth trophy.