SOLES COMES TO ITS SEVENTH FINAL 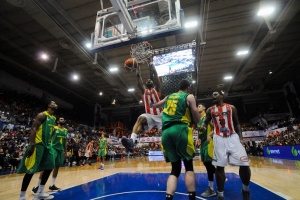 After a thrilling game, Mexicali Soles defeated Aguacateros of Michoacán 80-76 to close the series 4-2 and thus advance to the National League of Professional Basketball (LNBP) great final.

Almost five thousand fans witnessed the best entry of the season, where the Cachanilla quintet won their seventh ticket to the final in their history and fourth in a row.

Aguacateros started with an advantage scoring 0-5 but after a good defense, Mexicali managed to turn around the board to 7-5.

The locals seemed to control the actions but the Michoacan’s team, after finishing the first quarter, revolted to end up winning the partial 17-21.

In the second quarter, Soles strengthen their defense leaving only 13 points to the visitor, while the attack managed to add 19 to their cause, being Phelps and Behanan with 12 and 10 points respectively who led the Cachanilla attack.

For the third quarter, coach Iván Deniz sent the score to Orlando Méndez who took control of the offense, which gave Joseph Soto time and space to nail 3 triples, while Lucas Martínez and Aaron Valdez also contributed their share of medium and long distance shots.

Aguacateros sold face the defeat as starting the final period putting pressure on Soles but little by little started discounting the disadvantage to the point of placing the board on 76-73 with 10 seconds left, but Lucas Martinez and Orlando Méndez made good free throws to keep the victory at home with a final score of 80-76.

The fans did not stop supporting Soles during the whole match, driving their Suns towards victory.

Now Soles advances towards the great final where they’ll look for the third title in their history.

Soles will face Captains of Mexico City for the series title that starts at 9:00pm, on Tuesday April 3 and Wednesday April 4 at the PSF Auditorium in Ciudad Deportiva Mexicali.