Soles basketball team will play at home in October 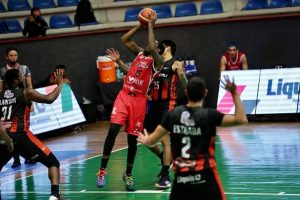 Mario Flores, shared some relevant news about the 2020 LNBP (National Professional Basketball League) tournament that began on September 10. The addition of a new sponsor and commercial ally was announced, “Clean is good”, a company dedicated to the manufacture and sale of cleaning products. An agreement was signed (symbolically) specifying it covers three seasons. Guillermo Puente, commercial director of the company, said that it is an honor to support the community in sports.

On the other hand, the reintegration of Joseph Soto to team Soles was announced, who had previously debuted with the team and who received positive responses from some Internet users. “Coming back is a great blessing, I am very excited to put on the uniform and to wear the colors again,” said Soto.

A new home for Soles was also unveiled. “Thanks to a great job done by our municipal president, Marina del Pilar, we were able to use the State Theater facilities again,” added to the support of Governor Bonilla, allowed them to condition it to play, however, due to the current COVID pandemic 19, the league is not allowed access to the public at the moment, as stated by Cota.