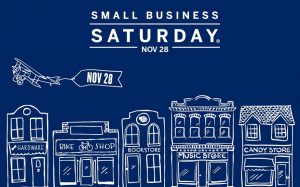 Sandwiched between Black Friday and Cyber Monday is Small Business Saturday, a national initiative to shop local and break away from large box stores. However, this year shoppers will notice a few changes because of COVID-19. Now they will have to enter the store with masks and maintain physical distance.

Since the start of the pandemic, more than 160,000 businesses nationwide have closed their doors and more than half of them are closed for good, according to the latest Yelp Local Economic Impact Report.

Shopping habits have also shifted this year as more people are trying to play it safe by shopping online instead of in person. According to Gallup’s annual holiday spending predictions, Americans will spend an average of $805 on Christmas gifts this year, significantly below its estimate a year ago and the lowest holiday spending projection since 2016. However, the U.S. Small Business Administration says the economy is picking back up as we head into the holidays.

The first event was created by American Express, in partnership with the non-profit National Trust for Historic Preservation, Boston Mayor Thomas M. Menino, and Roslindale Village Main Street. In 2010, the holiday was promoted by American Express via a nationwide radio and television advertising campaign. That year Amex bought advertising inventory on Facebook, which it, in turn, gave to its small merchant account holders, and also gave rebates to new customers to promote the event.

American Express publicized the initiative using social media, advertising, and public relations. Many local politicians and small business groups in the United States issued proclamations concerning the campaign, which generated more than one million Facebook “like” registrations and nearly 30,000 tweets under the Twitter hashtags #smallbusinesssaturday and #smallbizsaturday.