Breaking News
Home / Health & Fitness / Senior Citizens Camp Outside Imperial Valley Mall So They Can Get Vaccine; ECRMC Criticized for Lack of Organization

Senior Citizens Camp Outside Imperial Valley Mall So They Can Get Vaccine; ECRMC Criticized for Lack of Organization 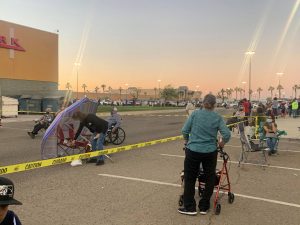 The demand for vaccination against COVID-19 in Imperial Valley is high as approximately 400 people -most of them senior citizens- will be camping overnight outside of the Imperial Valley Mall in El Centro, California, to get the vaccine.

Most of those seniors between the ages of 70 to 80 years old were more than willing to spend the night at the parking lot next to Cinemark and fight the scheduled 50 degrees’ temperature during the morning of Jan.18.  California Gov. Gavin Newsom announced last week that residents 65 and older are eligible to receive the COVID-19 vaccine.

The two major hospitals in Imperial County, California, El Centro Regional Medical Center and Pioneers Memorial Hospital announced vaccination for senior citizens. Originally, El Centro Regional was going to have their vaccination at their medical building adjacent to the hospital but decided to move it to Imperial Valley Mall where they have a community education center. ECRMC advertised the vaccination on a first-come, first-serve basis. Hospital CEO Adolphe Edward said during a live broadcast through their Facebook page earlier that day that there would be only 600 Moderna vaccines available.

“If you are not 65 years of age you shouldn’t be in line,” Edward said, “even if you are a day shy of being 65 you will not be able to get the vaccine,”

The Imperial Valley had the most cases of COVID-19 cases per capita in California and was the hardest-hit areas during the first wave of nearly a year ago. For many of the senior citizens waiting in line, it was important for them to get the vaccine even when they had to wait 12 hours.

It was almost like the Black Friday of the COVID-19 Vaccination but without any coordination from organizers.

Many seniors that spoke with Beyond Borders Gazette were more than willing to stay overnight but most of them were upset about the lack of logistics and organization by the El Centro Regional Medical Center as to when and how will they be allowed inside. Some of them were camping outside the mall at 8 in the morning so they can get the vaccine.

Roberto Covarrubias Madrid, 70, resident of Calexico, said that he and other people in line have chronicle problems, and if the organizers don’t do anything to improve the logistic, most seniors will wake up in the morning with more health problems.

“This is a message for the Imperial County Health Department so there can be more organized vaccinations for the community,” Covarrubias said.

“Instead of having us old people stay here all night, they could just give us a ticket so we could come back in the morning to get the vaccine,” another man said who didn’t provide a name.

El Centro resident Nancy Rood said that she and her husband came to get their vaccination but first did a count to know if she would be within the 600 that will be vaccinated and stay all night.

“I was a good idea to move the event from the hospital to the mall but I think I would have been better if they did appointments and I’m very disappointed that it will be a first-come, first-serve and having people to get out in the cold in this crowd since it’s risky,” Rood said.

Beyond Border Gazette e-mailed Dr. Edward for comment on this situation but didn’t reply by press time.

By 6 p.m. the line surrounded the entire building of the Cinemark complex and people were anxious of getting information from the hospital but there was none available.

“Is there someone from the regional hospital we can talk to?” a woman asked a mall security person.

“There is no one from the hospital right now,” the security guard answered.

Another woman also expressed the displeasure of not getting any information about the vaccination. And proposed to everyone around her to do something about it.

“We should organize ourselves!” the woman said.