SENATORS AND BUSINESSMEN WILL PUSH FORWARD FREE TRADE AGREEMENT WITH U.S.A. AND CANADA 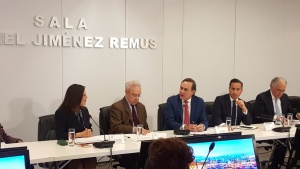 MEXICO CITY.- In order to know the details of the new Free Trade Agreement between Mexico, the United States and Canada negotiations, the president of the Commission of North America Foreign Relations, Gina Andrea Cruz Blackledge, summoned entrepreneurs so they participated in the negotiation, as well as senators from different parliamentary groups, who had the opportunity to clear their doubts.

The meeting was held a dew day ago in the facilities of the Senate of the Republic, to which members of the Business Coordinating Council (CCE) attended, the so-called “quarter together”, even although they participated in the negotiations, they did not do it directly.

At the meeting, the business representatives explained that a very beneficial agreement has been reached for our country, in particular, the treaty has been modernized in many aspects, such as in trade facilitation, cooperation for the application of the treaty in customs, new rules of origin, auditing, sanitary and phytosanitary measures, digital commerce, state-owned companies, and Mexico has managed to add the anti-corruption issue.

Significant consensus has also been achieved on sensitive issues among the three partner countries, such as the automotive industry, agriculture, dispute resolution mechanisms, labor, and environmental issues, the review clause, and the transport sector.

The exponents pointed out that the negotiation was an arduous and meticulous process, where more than 600 internal meetings and more than 300 were held abroad, with respect to the United States: 20 in the White House, 54 with the House of Representatives, 25 with the Senate, 50 with governors and 106 with the private sector.

The members of the CCE thanked Senator Gina Cruz for her invitation and pledged to continue collaborating closely in all that remains of the process so that the treaty can be ratified by the Senate of the Republic.

Presidents of the Foreign Relations Commissions, Senator Hector Vasconcelos, and the Economic Commission, Senator Gustavo Madero, among many other legislators attended the meeting.

On behalf of the CCE were present, its national president, Juan Pablo Castañón, as well as Moisés Kalach, Herminio Blanco and Jaime Zabludovski.