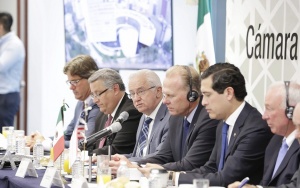 During the 13th representatives of the San Diego Regional Chamber of Commerce annual visit to Mexico City, in the Senate of the Republic, in Mexico City, Victor Hermosillo and Celada, senator for Baja California, spoke about strengthening the North American region and, in In particular, Mexico’s relationship with the United States, prioritizing shared values ​​between the two nations.

Faced with the economic and commercial dynamism in the border, the also member of the senatorial commission of Foreign Relations of North America, affirmed that the NAFTA will continue with changes and updates; however, he regretted that for a long time there has been no longer lobbying in the relations between the United States and Mexico, not only in a governmental sphere, but also in the business sector.

In this regard, he called on California businessmen to sell the idea of ​​what can be done in that region and transmit a message of unity that counters the diffusion of situations that ultimately does not impact the direct relationship of US citizens with Mexicans.

“How can two countries that are neighbors be fencing and fighting with each other? If the drug situation is strong in the United States is because there is consumption and as long as there is export, it is logical; on the other hand, Mexicans are not a problem for the United States, the Mexican who crosses the border is someone who wants to work “, therefore, he emphasized that the worst thing that both countries could do is have a bad relationship which sets a very bad example to the world.