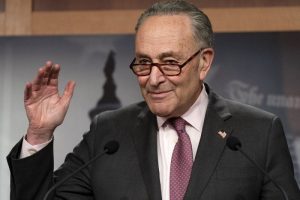 The far-reaching legislation includes $1,400 stimulus checks, $300-per-week jobless benefits through the summer, a child allowance of up to $3,600 for one year, $350 billion for state aid, $34 billion to expand the Affordable Care Act subsidies, and $14 billion for vaccine distribution.

The final vote was 50-49 along party lines, with every Republican voting “no.” It came after Democrats voted down a swath of Republican amendments on repeated votes of 50-49 to avoid disrupting the delicate agreement between progressive and moderate senators.

“We will end this terrible plague and we will travel again and send our kids to school again and be together again,” Senate Majority Leader Chuck Schumer, D-N.Y., said before the vote. “Our job right now is to help our country get from this stormy present to that hopeful future.”

Democrats settled on a plan to keep the current $300 per week jobless benefit boost in place through Sept. 6 while making the first $10,200 in assistance tax-free. The proposal trimmed the $400 weekly supplement through Aug. 29 passed in the House a week ago.

Republicans said the legislation is too big and bloated.

“The Senate has never spent $2 trillion in a more haphazard way or through a less rigorous process,” GOP Leader Mitch McConnell, R-Ky., said before the vote.

McConnell (R-Ky.) made a failed bid to adjourn the Senate and punt the debate on the Democratic Coronavirus bill until Saturday.

McConnell’s move came after the Senate sat in limbo for nearly 12 hours on Friday as Democrats tried to work out a deal that could win overall 50 members of their caucus.

“They want to begin the vote-a-rama that could have been done in daylight because of their confusion and the challenges of getting together 50 people to agree on something when they could have doing it quicker on a bipartisan basis,” McConnell said. “So rather than start the voting at five minutes to 11, I move to adjourn until 10 a.m.”

His motion failed and later added.

“This isn’t a pandemic rescue package. It’s a parade of left-wing pet projects that they are ramming through during a pandemic… We could have worked together to do something smart to help finish this fight as fast as possible. Democrats decided to do something else,” McConnell said.