Secretary of Labor, Alex Acosta resigns, another one during Trump’s Administration 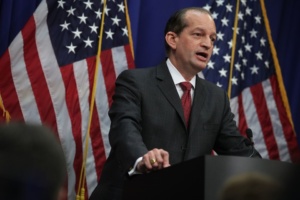 In recent months, Donald Trump has suffered some important resignations within his administration; for differences situations with the President of the United States, decided to leave office. However, this past weekend, with the resignation of Alexander Acosta, the only Hispanic of his cabinet, the reasons those surround the issue caused a massive discontent, which forced the resignation of the Secretary of Labor.

The Secretary of Labor, has resigned last Friday under pressure from the Democratic Party, and thousands of citizens who demonstrated in social media, after being questioned for his performance in 2008 as Federal Prosecutor in the court of Miami, to manage a plea agreement with billionaire Jeffrey Epstein, who registered him as a sex offender, to spend only 13 months in prison, and to compensate the victims named.

The now ex-secretary Acosta, declared to have resigned from his position in the cabinet, considering that it was the right thing to do, but not before defending his position taken in the case of 2008, and congratulating the court of New York for acquiring new evidence that blames Epstein.

Epstein, 66, well-known Finance Manager who is responsible for facilitating tax payment processes to large corporations, he has been summoned by the federal court in New York, after finding new evidence that he is the intellectual author of a whole network of women trafficking, some of them minors in Palm Beach Florida, with whom he had sex by scamming them between 2002 and 2005.

The defendant was also famous for partying with personalities, such as former President Bill Clinton, Prince Andrew of England, as well as current president, Donald Trump. Epstein has had to face the law again, thanks to an investigation conducted by the Miami Herald journalist, Julie Brown, who alleges to have suffered censorship from private parties that hindered her work, which was published by the New York Times at the end of 2018.

With the resignation of Acosta, there are already four resignations in the last three months, including the Secretary of the National Security Department, Kirstjen Nielsen; the Deputy Secretary of the Department of Justice, Rod Rosenstein; and the press media secretary and spokesperson for the White House, Sarah Sanders; this last one resigned just last June 13.