Second round of NAFTA renegotiation in Mexico began

Mexico City will deal with issues such as rules of origin, environment, digital commerce, small and medium enterprises, transparency and anti-corruption.

The largest company in the United States warns that it would be a “very big mistake” to end NAFTA. “The Mexican NAFTA negotiating team is one of the best in the world, but we must not rule out the negotiating team of our trading partners,” said Dr. Alejandro Díaz-Bautista, an economist, national researcher at Conacyt, as well as a research professor at the College of the Northern Border (Colef). 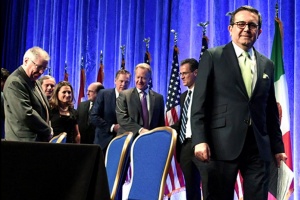 Representatives from Mexico, the United States and Canada began the second round of renegotiation of the North American Free Trade Agreement (NAFTA) which takes place in this country.

The termination of NAFTA would be a “very big mistake” that could trigger a “trade war” in North America and affect millions of jobs in the United States, warns Cargill’s president, the largest privately held US Company, David MacLennan.

Among the topics to be discussed in Mexico is the one related to Chapter 19, tight to the mechanisms of dispute resolution, and which the United States proposed to eliminate, however, Mexican authorities seek to make it more agile, transparent and effective.

According to the Ministry of Economy, from September 1 to 5, the negotiating teams met in 25 working groups to discuss issues of the market for goods, investment, rules of origin, trade facilitation, environment, digital commerce, small and medium-sized enterprises, transparency and anti-corruption, among others.

The process of each round of negotiations will be announced to the national productive sectors, grouped together in the “room”, as well as the committee of Senators that play along in the modernization of NAFTA. And to conclude activities, the head of the unit, Ildefonso Guajardo, will hold bilateral and trilateral meetings with US Trade Representative Robert Lighthizer and with Canada’s Foreign Minister Chrystia Freeland.

It is also expected that at the conclusion of the second round, there will be a meeting between Mexico, Canada and the United States, to publicize the progress achieved so far.