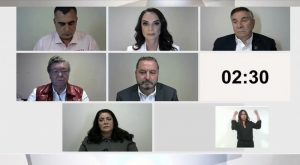 MEXICALI, B.C.- This Sunday, the second debate of the candidates for governor was held, which was organized by the Baja California State Electoral Institute (IEEBC), however, Marina del Pilar Ávila Olmeda, candidate for the Morena coalition, PT (Labor Party) and PVEM (Green Ecologist Party of Mexico) was absence.

For this debate, the moderators were Gabriela Martínez and Jorge Heras; it was divided into blocks of questions mainly about the environment, human rights, education, and sexual diversity. A reach was obtained through the IEEBC Facebook page with more than 104 thousand views, 14 thousand comments, 1,300 reactions, and 680 shares.

Regarding vehicle verification, Victoria Bentley Duarte, from the Progressive Social Networks party, stressed that having been elected as governor, she will focus on the creation of new programs for the inspection of automobiles, which would be done for free, highlighting a government socially inclusive, she commented.

For his part, the candidate of the Citizen Movement, Francisco Alcibíades García Lizardi, commented that he will work for hand in hand with the construction companies to work on the management of construction waste and debris. Carlos Atilano Peña, for the Baja California Party, said he was concerned about lack of leadership by the state government over unregistered cars, and to be a manager towards the nation’s government so that citizens pay fair prices for the importation of their automobiles.

Regarding the binational water problem, specifically, the plant in Rosarito that has spilled untreated sewage into the sea for years, María Guadalupe Jones Garay of the PRI, PAN, PRD coalition, included is ecocide and we must be a state of the model in terms of ecology and care of the environment. On his part, Jorge Ojeda, candidate of Fuerza por México, commented that he would encourage companies to align themselves to be socially responsible since, he said, there are only 4 responsible companies in the state.

Bentley, said the National Education Program, does not adhere to the needs of the state; she pronounced the importance of making back payments to teachers. For his part, Hank Rhon of the PES, proposed to fix the distribution of water, so that it is sufficient for all citizens. Atilano mentioned, regarding Morena’s candidate, that a candidate who refuses to stand for debate does not deserve to govern Baja California.

On his part, Francisco Alcibíades of the Citizen Movement said that all people have the right to have their gender identity recognized. In addition, Alcibíades and Atilano spoke out in favor of equal marriage and the decriminalization of abortion; Hank Rhon and Bentley highlighted the reinforcement of sexual education for young people, while Jones appreciated working with the LGBT community during her trajectory, in regards to abortion she will focus on generating options for women.