As part of the social commitment Beyond Borders Gazette has with the community, the editorial director of the media outlet, Ellie Burgueño, visited the prison Cereso’s facilities in Mexicali to deliver the conference “Transforming Lives”, dedicated to women prisoners who are on their way to retake their lives.

It was 10:30 am on Friday, June 28, 2019, that Ellie Burgueño, accompanied by the Beyond Borders team, and staff from the Institute of Culture of Baja California (ICBC), met inside the CERESO to speak to about 100 female inmates, who were enthusiastic about listening to the author of the book “Second Chance.”

During the talk, she explained to all women, anecdotes and situations about the adversities she has had to go through as a daughter, wife, and enterprising woman, as well as references to her book, about self-esteem, and how to overcome hardship in spite of the circumstances, in addition to talking about the importance of learning how to forgive, and finding oneself.

In the same way, she shared with them a series of exercises to stimulate them and recreate their perspective of life, trying to create an atmosphere of empathy, where they could feel understood to participate and share what they feel, and what they want to do, once they are released to retake their lives. 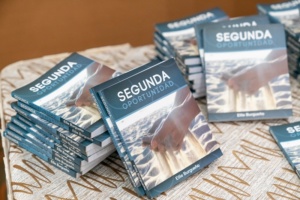 The Director of CERESO Mexicali thanked Burgueño for sharing her experiences, and for leaving her book at their disposal, which, as its name says, seeks to offer them a second chance.

After this first conference, Ellie Burgueño together with the ICBC will schedule a second conference at the Cereso Tijuana and she will also start a book tour throughout the state of Baja California.