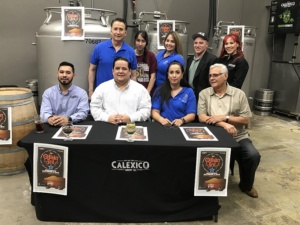 Beer, music and a great time with friends are some of the great things expected at this annual Oktoberfest in Calexico.

In partnership with Calexico Brewing Co. and Auti-Foundation, the City of Calexico will bring the second annual Oktoberfest event, on Oct. 5 from 5 p.m. to midnight at Crummett Park in Calexico located on Dool Ave. & Belcher St.

Over twenty-five breweries will be on-site pouring their favorites and most popular crafted beers.  Tickets will be $10 per person. Children under 10 years of age can go in free. Tickets can be purchased at Calexico Brewing Co. or at the event.

The goal of the first Oktoberfest was to bring something different to Calexico and give the city a new identity.

“I believe the festival last year helped Calexico become a lot more united through beer. It maybe didn’t entirely change the image but it was definitely a clear example that Calexico is on its way to better things,” said Jose Luis Yepez Jr., owner of Calexico Brewing Co.” The community definitely responded in a positive way and showed us that they are thirsty for diversity in beer and community gatherings.”

Yepez added this year they are having more craft beer who will be coming from San Diego.

“We will also have a lot more food options and games,” Yepez said.

This year a percentage of ticket sales will benefit the Auti-Foundation, a non-profit organization dedicated to promoting education and inclusion of people with Autism.

“Auti-Fundación is very happy to have the support of OcktoberFest and help us support families in Calexico. This is the first fundraising event that we participate in,” said Karina Kuljacha, director of Auti-Foundation.  “We are a group that works with families and the community in autism awareness. We have some pending education projects that we haven’t done due to lack of funding.”