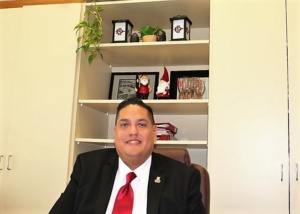 Victor Nava, a former Rabobank and Mechanics Bank executive and who is well known for his community involvement, has been named Director of Development & P3 Initiatives at San Diego State University Imperial Valley. P3 Initiatives refer to public-private partnerships with the university.

Nava started his new position on campus this week following a career in banking and finance that spanned more than 22 years.

“I made the career change because I believe the time is right for us to meet the needs of our students and the community as the campus becomes a public 4-year university,” Nava said. “With the incredible resources the campus already has and is developing, we have the opportunity to do something extraordinary for our Valley.”

He said he will be working to enhance donorship to support scholarships and programs for students. He also will be responsible for also P3 Initiatives, which are public-private partnerships that are now used to help universities finance and develop facilities for growth.  SDSU IV’s plans call for the development of laboratory classrooms.

Nava comes to his new position with a depth of knowledge about the campus. He has served on the SDSU IV Dean’s Advisory Council since 2017.

Of Nava, SDSU IV Dean Gregorio Ponce said, “It has taken us a very long time to find the right person for this very important position. Victor brings both the unique skills needed and a depth of understanding about our community. “

He was a personal banker at Wells Fargo Bank in El Centro before joining Rabobank, where he managed multiple banking functions. He also was the Brawley Branch manager, retail market manager of four offices and manager of the El Centro Branch of Rabobank and then Mechanics Bank.

He is currently a board member of Accion and the El Centro Chamber of Commerce Board of Directors and is the Ambassador Chair. He also is part of the Imperial Valley Regionalization Committee.