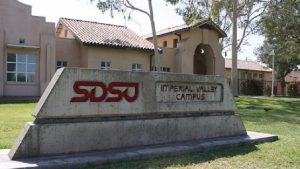 The census shows SDSU Imperial Valley now has an FTES of 873.95, up from the record set last year at 829.  FTES is figured by taking the total number of credit hours for which students are enrolled and dividing by 15. The previous campus high FTES of 791.2 was set in 2015.

“We can all celebrate these numbers today,” said SDSU Imperial Valley Dean Gregorio Ponce.  “They are a sign that the hard work we are doing to grow the opportunities our campus offers students and the Valley are working.”

SDSU Imperial Valley’s continued growth is even more impressive when compared to other colleges within the university.

In a message to the campus, Ponce wrote, “We celebrate too, in comparison with all the other colleges, that SDSU IV showed the largest growth at 105.4 percent.

“A big thank you and a bigger ‘Felicidades’ to all of you for this great accomplishment!” his campus message added.

The increase in FTES comes as the campus continues the work of implementing an ambitious goal of doubling total SDSU Imperial Valley enrollment to 2,000 students over the next five years. To that end, the campus has added full-time four-year degree programs, advanced degree programs and other offerings.

In addition to the freshman courses, the campus hired as its new Associate Dean for Academics Dr. Mark Wheeler, the immediate past President of the SDSU University Senate, to help expand the local academic offerings. It also added two new faculty positions and enhanced services to assist students in attending courses on virtual platforms.

The increase in FTES is even more impressive because it reflects students’ dedication to getting a university education at a time when almost all instruction has had to move to virtual platforms due to the pandemic.

And while many universities have lost students because of the shift to virtual learning, SDSU Imperial Valley’s headcount of 1,064 is just one down from 2019’s record enrollment.