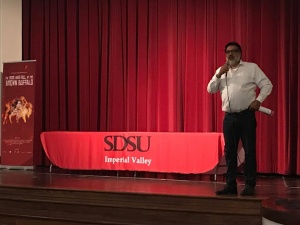 The history of the Chicano Movement is rich and their bravery marked a generation. Among the icons of that movement are Cesar Chavez and Dolores Huerta who, to this day, inspire new generations of Mexican-Americans.

There is one person, however, that is not very well known but made a huge difference in the movement despite his unusual way to doing things.

San Diego State University Imperial Valley Campus hosted the screening of the documentary “The Rise and Fall of the Brown Buffalo” to the students and community. It showed the story of radical Chicano lawyer, author and counter culture icon, Oscar “Zeta” Acosta.

Oscar “Zeta” Acosta was an American attorney, politician, novelist and activist in the Chicano Movement. He was most well-known for his novels Autobiography of a Brown Buffalo and The Revolt of the Cockroach People. Acosta joined the Chinano Movement as represented group and activists that were targeted by police or political repression. His controversial defenses earned him the ire of the police, who often followed and harassed him.

He ran for Los Angeles County Sheriff to raise awareness about law enforcement abuse towards minorities. He promised if he won he would finish with the Sheriff Department. He lost by a million votes.

In 1974, Acosta visted Mazatlan, Sinaloa, Mexico but never came back. He is presumed dead.

Phillip Rodriquez directed the documentary “The Rise and Fall of the Brown Buffalo” that puts Acosta’s story in a way that brings to light his contributions to the Chicano Movement that have been long forgotten. The documentary was dramatized and his story was put together by journalistic articles, letters and testimonials.