Some time ago it was a trend in social media that the devilish doll Anabelle had escaped from her containment cell in the museum, where she was kept on display, this was obviously a joke, which went viral.

What is not a joke, is a very curious effect of the new coronavirus, SARS-CoV-2, which causes Covid19, and which has been found in laboratory samples, but which gives us an idea on how to combat and prevent the infection of this virus: the formation of Filopodia.

I explain: the cells of the respiratory epithelium, have on their surface, structures called cilia, some cells of ciliated columnar epithelium, which cover the nose, paranasal sinuses, trachea and bronchi, have these structures to be able to mobilize the mucosa that is produced by the movement of you’re, pulling mucus out of our airways. The curious thing is that in culture media, the virus, which by its very nature, requires a living cell to reproduce, causes some infected cells to produce, through modifications in the 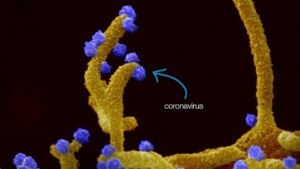 cytoskeleton, and in the same cell cycle, ciliated structures, called Filopodia, which make these cells more similar to the cells of the ciliated respiratory epithelium, apparently as a mechanism to infect more and more cells, the modifications in the cytoskeleton of the cogenitor cells of the virus are such that the cell remains in a constant state of metabolic and genetic stress, which makes it remain in a phase of its cell cycle where it does not reproduce, this opens doors for new research and new prevention methods, since the virus prefers the cells of the nasal respiratory epithelium as a means of entrance, and perhaps using the movement of the cilia as a mechanism to deepen the infection, to be able to reach the pulmonary alveoli and there produce the most devastating damage: The cytokine storm, which produces hypoxia, complication and death of the patient.

Perhaps a method that prevents the movement of these Filopodia or the cilia of the respiratory epithelium, can slow down the advance of the infection, giving the body time to deal with the virus, this method would be used together with the vaccine, once it is soon available.