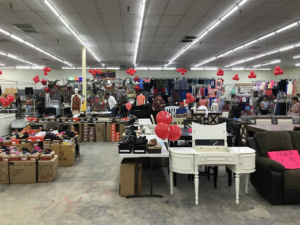 They say it’s darkest before dawn and that it might be an example for many Santo Tomas merchants who found a new place to sell and start all over again.

It’s been a difficult eight months for many of Santo Tomas merchants who lost everything in December due to the fire but found a place to be in business again now at the Calexico Indoor Swap Meet.

“It’s great to be back and start all over, from the bottom, but I’m starting again,” one merchant told Beyond Borders Gazette when asked how she felt of being part of this in-door swap meet.

A devastating fire was the beginning of the end for Santo Tomas when around 7 p.m. on Dec. 8, 2018, a fire started which burned down a section of the Swap Meet. Six months later, Santo Tomas decided to close down due to they’re financial loses during the year.

However, that did not stop people like Alberto Alvizu to work with other merchants to open this indoor swap meet.

“Some of us merchants got together and we’re looking for places we could be at,” Alvizu said,” We found this place and the opportunity arrived to open.”

Only fourteen merchants will be working at the indoor swap meet due to space limitations.

Present at the event was Juan Carlos Gonzalez, former operations manager at Santo Tomas. Gonzalez worked for 45 years at Santo Tomas and worked alongside the merchants during the hard times. Although he is not part of this business venture, Gonzalez was glad to see this open.

“The entrepreneur spirit they have is something to admire and the city needs to value their efforts and create that synergy needed to make this a success,” Gonzalez.

The Calexico In-Door Swap Meet had its ribbon-cutting ceremony where they welcomed a big crowd of people that came to support the new shopping location. The swap-meet is located at 438 Grant Avenue and will be open seven days a week.