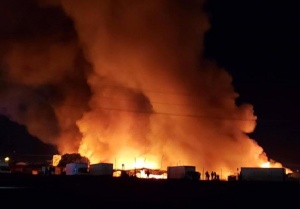 Today, the place was closed for the public due to a devastating fire that affected the place. Around 7 p.m. on Dec. 8, a fire started at Santo Tomas that burned down a section of the Swap Meet. Firefighters from Imperial County assisted the Calexico Fire Department in controlling the fire.

Approximately 30 lots were lost during the fire and damage are still yet to be quantified. There is a possibility that Santo Tomas could be back selling to the public next week.

Merchants gathered Sunday morning outside of Santo Tomas wanting to know the status of the Swap Meet and if they would be able to enter. The Calexico Fire Department will be investigating the cause of the fire and will not allow anyone in during that time to ensure that the place is safe for people to come in.

Santo Tomas merchant Araceli Ceballos said they were told that on Tuesday they will be informed if they can go into Santo Tomas and review their items.

“Even when there was a section that burned, all of Santo Tomas has been affected since the smoke damaged our products and that will force us to rebate since our clients won’t like smoked products,” Ceballos said.

Calexico resident Javier Moreno communicated with merchants the situation and said they need to identify the people that were affected to help them with city and county funds available.

“We need to identify the resources available to them to support them because most of them have children and this is their livelihood,” Moreno said.

County Supervisor District 1 John Renison and Calexico City Councilman Bill Hodge arrived and spoke to the merchants and promised that they will help them to open their businesses again.