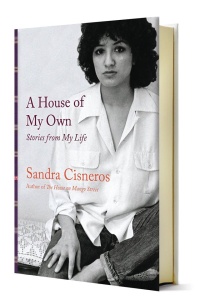 Poet and fiction writer Sandra Cisneros grew up in Chicago, the only daughter among the seven children of a Mexican-born father and Mexican-American mother. As a child she moved frequently between the United Stated and Mexico, spending periods in her father’s hometown of Mexico City. As she recalls humorously in one poem, her father envisioned professional careers for all his children, pointing his sons towards medicine and law but deciding that she would be ideal as a television weather girl. She attended Loyola University in Chicago and is a graduate of the University of Iowa Writers’ Workshop, where she has said that she first realized that her unique bicultural experiences could “fill a literary void.”

Cisneros’s first book was Bad Boys (1980), a poetry chapbook from Mango Publications, a small publisher specializing in Chicano Writers, and she has since published two other books of poetry, My Wicked, Wicked Ways (1987) and Loose Woman (1994), both of which explore ways of feminism, sexuality, and cultural identity. Her books of fiction include The House of Mango Street (1984), which received the Before Columbus American Book Award and brought her to the attention of critics and a wider audience and Woman Hollering Creek (1991). The House on Mango Street employs an experimental form, consisting of brief sketches and longer stories which use a central protagonist. The compression, rhythms, and imagery of short pieces like “Barbie-Q” are perhaps as close to the spirit of prose poetry as to fiction. Woman Hollering Creek uses other experimental devices, including epistolary style and collage.

Cisneros has taught at a number of universities, including the University of California Berkeley and the University of Michigan. She has received numerous awards, including a fellowship from the National Endowment for the Arts and, in 1995, a prestigious MacArthur Foundation Fellowship. She lives in San Antonio, where she owns a home in the King William Historic District.