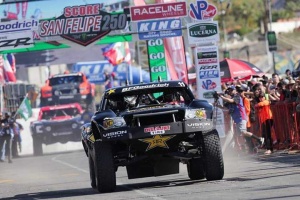 SAN FELIPE, BC- Tuesday, April 9, 2019.- As a result of the 33rd edition of the Off-road races “Score 250” that took place from April 3 to 7, the State Government, through the Secretary of Tourism (SECTURE), informs the rise in hotel occupancy reached in San Felipe.

The Sub-delegation of Tourism in San Felipe, said that “this event has been one of the most important in our calendar of events, generating a hotel occupancy of 100%, also offering a vast range of cuisine and activities that more than 53 thousand visitors could enjoy during that period, which generated a significant consumption of products and services. “

He indicated that 233 participants from 29 countries were registered, including Australia, Canada, Finland, Italy, New Zealand, Peru, Thailand and of course the United States and Mexico; highlighting that there was a white balance in all categories thanks to the coordination with safety authorities.

Likewise, he added that air operations at the San Felipe International Airport increased compared to the same period last year. In 2018, 101 operations were registered, while in this year 153 operations were recorded, receiving a record number of 28 aircraft and 17 helicopters.

He expressed the importance of the airport, since it is a fundamental part of this race through the desert, since there is an air ambulance service, in addition to all the teams that are monitored by their own helicopters, jets and airplanes.