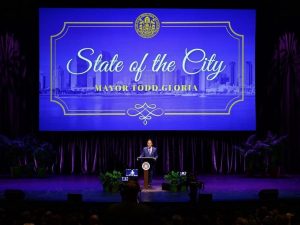 In his third State of the City address as the 37th Mayor of the City of San Diego, Mayor Todd Gloria detailed the considerable progress on the City’s top issues – infrastructure, public safety, homelessness, and housing affordability. The mayor made several policy announcements as part of his address, among them an executive order – signed moments before he took the stage – that will expedite City approval of affordable housing projects to 30 days.

“None of tonight should come with the suggestion of mission accomplished,” Mayor Todd Gloria said. “Our city has crawled out of the deepest of valleys, and we now find ourselves climbing the highest of mountains. The summit may be far in the distance, but San Diego is taking steps every day to reach it – and we will.”

After delivering his first two State of the City addresses virtually to prevent the spread of COVID-19, Mayor Gloria gave this year’s speech in front of a live audience at the Civic Theater, a location that symbolizes the City’s aspirations to revitalize neglected public sites to add significantly to the region’s housing supply. The theater sits amid six blocks in Downtown’s civic core that the City plans to redevelop into a new City administration hub and thousands of homes for working-class San Diegans.

“This once-in-a-lifetime transformation will revive the Downtown civic core, create a welcoming place of beauty and culture that will serve generations long into the future and that is emblematic of the big-city energy we must embody,” Mayor Gloria said.

Consistent with his long-held priorities, the Mayor focused his speech on infrastructure, public safety, homelessness, and housing. He filtered his address through the experiences and stories of everyday San Diegans whose lives have intersected with and influenced the city’s progress toward better, more equitable infrastructure and services.

Noting that he is “impatient for progress,” the mayor announced new measures to speed up progress on key priorities like permitting affordable housing, fixing streets and sidewalks, reducing the number of people who are homeless and living on the streets, and recruiting police officers to help San Diego remain one of the nation’s safest big cities.

Mayor Gloria also touted progress on San Diegans’ top priorities, highlighting the decrease in crime in 2022, significant progress on park improvements and street repaving, and the movement off the streets and into stable housing for more than 2,200 unsheltered San Diegans over the past year.

In talking about infrastructure, Mayor Gloria introduced two San Diego families, the Walkers of Paradise Hills and the Winters of Scripps Ranch. Daneyel and Tommy Walker run a coffee shop in Encanto and for years have been advocating for community improvements like sidewalks and streetlights in southeastern San Diego. Steven and Jennifer Winter and their sons Austin, Carson, and Jackson waited for nearly a decade for a promised park to be completed near their home in Scripps Ranch.

The mayor highlighted the City’s completion of these and other long-awaited projects and said the City owes it to families like the Walkers and the Winters to get improvements done faster.

“I recognize there will always be roadblocks of some kind,” he said, “Our job is to find a way around them – or over or under or through them – so we deliver for San Diegans. “

“I’m still with my fellow San Diegans in our continued quest to fix the damn roads!” Mayor Gloria said. “And we are getting it done.”

The mayor pointed to his proposed update of the City’s Street Preservation Ordinance as an additional tool to improve San Diego’s road conditions. The amended ordinance would require utilities that dig up the streets to repair them more fully and quickly – and to foot the bill for the restoration.

In the fiscal year 2024, the updated ordinance is expected to result in an additional 25 miles of repaved streets.

Mayor Gloria also announced a new initiative to streamline permitting and reduce fees for property owners to repair sidewalks in front of their homes or businesses.

Last year in his State of the City, Mayor Gloria committed to fully funding all of the City’s public safety services and followed through with that commitment in his budget. This year, the Mayor committed to doing the same to keep San Diego one of the safest big cities in the country.

Unlike other big cities in the nation, the Mayor announced that crime in San Diego went down 7.5 percent in 2022. Property crime went down by 9.7 percent, while the most serious violent crimes were down by 13 percent. This is according to the latest data from the San Diego Police Department.

“I’ve said it before, and I’ll say it again: Lawlessness will not rule the day in our city,” the Mayor said.

Pointing to a crisis that has quietly grown during the past five years, Mayor Gloria expressed his support for law enforcement’s efforts to fight the powerfully addictive illicit fentanyl. In November, he signed an executive order to strengthen and prioritize enforcement around illicit fentanyl, and he has asked federal leaders to permanently classify it as a Schedule 1 drug.

“We need stronger laws at the state and federal level that give teeth to law enforcement’s efforts at the local level,” he said. “Current laws do not fully take into account the game-changing reality of how potent and deadly it is, nor its outsized impact on our most vulnerable residents.”

Mayor Gloria highlighted San Diego Police officer Erica Perez, who grew up in a challenging environment and overcame many obstacles to become a law enforcement officer. Officer Perez embodies the City’s efforts to diversify its police department so that our officers better reflect the people they protect and serve, particularly through the recruitment of women and people of color.

During his speech, Mayor Gloria introduced the audience to Natasha and Gabriel Martin, San Diegans whose lives have been upended by fentanyl and other dangerous drugs and who became homeless as a result.

The mayor detailed his comprehensive strategy to help people like the Martins by investing in robust street outreach, increased shelter capacity, and more permanent supportive housing, as well as advocacy at the state and federal levels to reform and strengthen mental health and substance abuse interventions.

In 2022, Mayor Gloria was among the foremost champions of Gov. Gavin Newsom’s CARE Court initiative, which will connect people struggling with untreated mental illness with a court-supervised care plan that provides the help and support they need. San Diego County will be among the first in the state to implement the program.

He also pledged to team up again this year with state Sen. Susan Eggman to reintroduce conservatorship reform legislation, an effort that narrowly fell short last legislative session. This year, he’ll advocate from the position of chair of the bipartisan California Big City Mayor’s Coalition, which represents the state’s 13 largest cities that are home to roughly 11 million Californians.

Since April 2021, the city has made an additional 658 shelter beds available to get folks off the street – a 61-percent increase. In 2022, partnering with the County, the San Diego Housing Commission, and several homelessness service providers, the city opened five new shelters that prioritize vulnerable populations like seniors and people who struggle with mental illness and addiction.

Mayor Gloria announced that, as early as next week, the city will open part of the old central library Downtown as a temporary shelter for women and soon will open a large shelter with private rooms for families. He also announced that the city plans to open a fourth site in its Safe Parking Program for people who have vehicles but not homes.

He said street outreach and shelters serve as important and effective connections to housing.

“I am so proud to report that in 2022, more than 2,200 people ended their homelessness through the City’s outreach and shelter system,” he said.