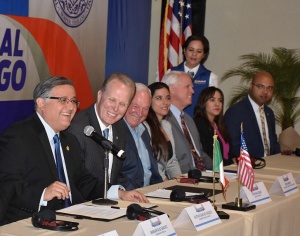 Mexicali and San Diego are two hours away from each other but as cities they have never had a close working relationship until today.

In a historic meeting held at the Cultural House in Mexicali, Baja California, San Diego Mayor Kevin Faulconer and Mexicali Mayor Gustavo Sanchez signed a Memorandum of Understanding making them sister cities and agreed to collaborate on binational issues that affect their cities and make the Cali-Baja Mega Region even stronger. This was Mayor Faulconer first visit to Mexicali.

Mayor Sanchez stated that the relationship began last October when he visited Mayor Faulconer and invited him to have a closer relationship between their governments and work closely to make sure the North American Free Trade Agreement (NAFTA) continues since it impacts border communities. Another goal of this relationship is to establish more bilateral collaboration between their Chambers of Commerce that can benefit their industries.

Mayor Faulconer said that San Diego and Mexicali are linked by their culture and people and need to work together to strengthen their binational relationship which can improve their economy and have a solid free trade. Faulconer emphasized that Cali-Baja is a unique tool that can help the region compete worldwide if they work together.

Mexicali Mayor Gustavo Sanchez Vasquez has been very proactive when it comes to forming relationships with city and county governments in the United States. Before Mayor Sanchez became Mayor, he visited the Imperial County Board of Supervisors to begin a collaborative relationship with the county.

He later reaffirmed the sister cities relationship with Calexico as he and Mayor Armando Real signed a sister cities agreement to continue the long standing friendship between the two border towns. Sanchez Marquez then organized the first border mayors summit where he invited the Imperial Valley Mayors as well as Mayors from Sonora and Yuma, Arizona.